Jelly Beans are a small bean shaped sweet with a sweet candy shell and chewy flavourful interior. A truly iconic sweet – they are instantly recognisable around the world for their bright colours and bean shape. In the last year alone enough Jelly Belly beans were eaten to circle the earth more than five times. That’s a lot of Jelly Beans! 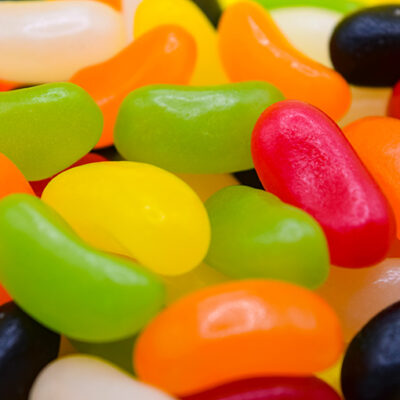 Easily named as one of the most popular sweets ever invented, Jelly Beans have been around since the 1860’s and have continued to make various appearances throughout pop culture. From the excitement of Beatlemania in 1964, where fans of the Beatles pelted the band with jelly beans, a beloved sweet for a beloved band, to the release of Bertie Botts Beans from the Harry Potter universe, resulting in a total of 20 new flavours and some new games of Jelly Bean fun, or torment depending on the bean!

Did you know? Jelly Beans were the first sweets ever to be sold as ‘penny sweets’. The penny in the name refers to the fact that originally the pricing was approximately a penny for a small paper bag of Jelly Beans. The concept of filling your bag with candy and purchasing by weight became popular in the early 1900s. And the first ever sweets to be sold this way was the Jelly Bean! Now you can’t go to a sweet shop without seeing this famous treat as an option. With the flavours ever developing Jelly Beans have well over 60 varieties of flavour to try!