Fizz Wiz is a brand of popping candy, each pack is made up of a collection of small pieces of hard popping candy crystals. An exciting twist on the normal hard candy, popping candy is created by embedding bubbles inside of the candy, which then create a small popping reaction when it dissolves.

The sweets world is filled with strange and exciting treats, perhaps none were as different or as innovative as popping candy. Kids around the world would be wide-eyed with amazement as the sugary rocks fizzed and crackled on their tongues in an explosion of loud pops echoing in their mouths. You can literally feel the sweet tasting explosions! 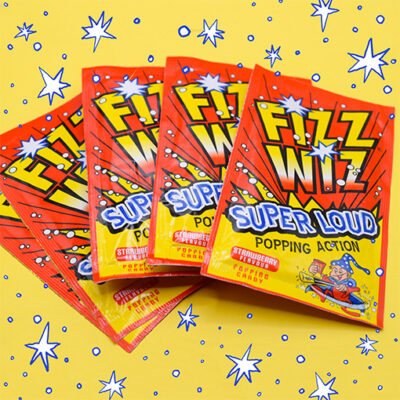 Fizz Wiz, the wonderful popping candy, is made by allowing the melted mixture of ingredients to come in contact with carbon dioxide gas that has been pressurised, causing small bubbles of the gas to be caught in the confectionery as it cools. On contact with moisture, popping candy makes sounds of crackling and popping, caused by the release of carbon dioxide as the candy melts, usually on one’s tongue.

Fizz Wiz has a long history of notoriety among both adults and children alike. The story of popping candy’s evolution over the years is definitely one that captures the imagination. It involves a science experiment gone ‘wrong’, quite successfully. Accompanied by an urban legend or two, and a reinvention exploding into multiple colours and flavours of this fantastic sweet!

In 1956 William Mitchell, a chemist for the American company General Foods created popping candy through a failed experiment. Mitchell’s original invention was to invent a fizzy ‘tablet’ to create an instant carbonated drink, luckily for us that was not successful and instead we were brought the sweet explosion of sugary goodness we love to experience today with sensational Fizz Wiz!

Did you know? People used to believe that if you ate popping candy while drinking soda your stomach would explode, because of the explosion-like sensation in your mouth when the hard sugary crystals dissolved. This popping candy urban legend surfaced in 1979, and was only ever a myth. This was confirmed as such when it was busted by MythBusters in 2003.