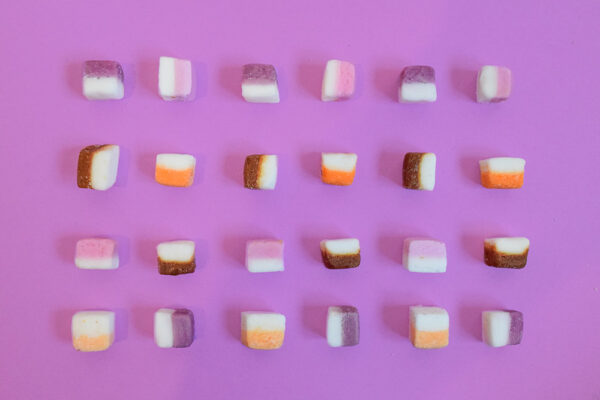 Dolly Mixtures a sweet traditional British confectionery from the 1920s. Consisting of an assorted range of flavoured sweets in a variety of shapes and colours. From the soft fondant cubes and tubes to sugar coated jellies these small sweets are mouth wateringly good.

A prominent staple of British culture, Dolly Mix pops up in the most unexpected of places from books, tv shows and bands. Dolly Mixtures have been a popular fixture in British pop culture since the 1950s.

For any fellow Harry Potter fans you might recognise the Dolly Mix dispenser from the famous Honeydukes sweetshop. A muggle safe alternative to Bertie Botts Beans and a less active option to the hopping Chocolate Frogs.

Did you know? The origin of the name ‘Dolly Mixture’ is an interesting debate between sweet enthusiasts. The facts themselves seem to be lost in time leaving these iconic sweets with a little mystery to the history of their namesake.

Some sources claim the sweets assortment was named after the daughter of one of the first investors or manufacturers of the sweet. Apparently the young girl’s given name was Dorothy but she was affectionately known by those close to the family and business as ‘Dolly’ resulting in the name Dolly’s Mixture which became Dolly Mixture. Others claim the name hailed from England’s trade routes at the time thanks to the East India Trading Company. This story mentioned one of the founders of the company who invented the Dolly Mixture was well travelled and was quite fond of an Indian treat known as a Dali Mix, which was a mixture of spiced candied nuts and fruit common to the region.

Whether it descends from a childhood nickname of one of the original sweet manufacturers daughter called Dolly or England’s international trade routes with India, and their popular Dali Mix similar to the Dolly Mixture we know today,  the Dolly Mixtures of today are a firm favourite and enjoyed by all the family.