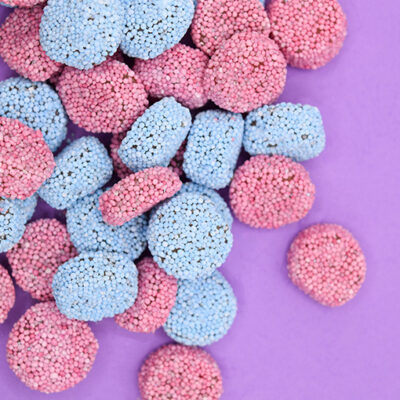 Spogs, formerly referred to as Horse Cakes or Jelly Buttons – a soft and chewy liquorice flavoured jellies covered in trademark pink and blue hundreds and thousands. Biting into a Spog they have a great bursting liquorice taste complimented by the crunch of the sugary pink and blue mini comfit beads.

The Spogs play a big role in the much adored Liquorice Allsorts selection of sweets and if you remember the history of Liquorice Allsorts you’ll know that ‘Jelly Buttons’ (Spog’s) were originally meant to be sold as there own sweet they were brought out in a sample setting one day with the intention of attracting investors. Fortunately for us the worker carrying said tray of sample sweets had an unfortunate trip and ended up mixing the sweets all together. Resulting in the Spogs addition to the Liquorice Allsorts selection! Which arguably is what has given them such a long lasting place in confectionary history.

If you’re a fan of liquorice flavouring and chewy gummy textures you’ll love Spogs! These soft liquorice gummy buttons are a real liquorice treat thanks to their incredible flavour and satisfying juiciness!