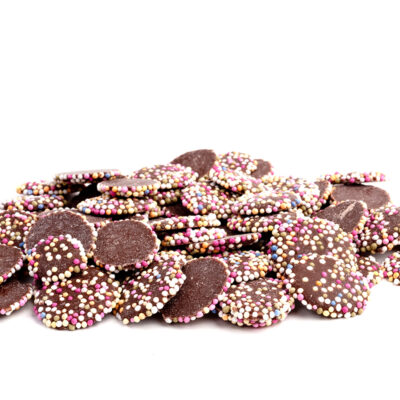 Jazzies are milk chocolate flavoured buttons peppered with brightly coloured hundreds and thousands. The melt in your mouth chocolate is complemented with the deliciously crunchy candy sprinkle topping. Their equally popular sister sweet Snowies are a white chocolate adaptation.

The sprinkles we now term ‘hundreds and thousands’ were originally referred to as ‘Nonpareils’. The French word for without equal, nonpareils literally means an unrivalled or matchless person or thing. In this case the inventors were referring to the sweets’ capability to be used as decoration, the decorator being the only limit to these unrivalled sweets’ possibilities. Their origin is uncertain, but they may have evolved out of the pharmaceutical use of sugar, as they are actually a miniature version of comfits.

We know the hundreds and thousands have been around for quite some time, with them cropping up as far back as 1844. When Eleanor Parkinson, a woman from a family of professional confectioners, first published her book ‘The Complete Confectioner’. Where she actually detailed how to make nonpareils following her comfit-making process, which involved multiple hot pots and syrup. By the mid 20th century the term nonpareils gave way to the more recognisable name ‘sprinkles’.

The invention of Jazzies came later and they were interestingly enough originally named ‘chocolate nonpareils’. They were also not as bright and colourful as today’s sweets, instead they were much simpler with a chocolate base and pearl like white sprinkles. This is why they were given the name ‘love pearls’ by the inventor’s wife. Of course this name changed and continued to adapt, leaving these sweets with a mountain of names used entirely depending on the region you happen to reside. Jazzies, Jazzles, Jazz drops, Snowies, Freckles, Chocolate freckles, Yummies and Jimmies – just to name a few.