American Hard Gums, the jumbo version of the US Gumdrops are a sugar coated fruity gummy sweet with a dome-like shape to them. These delicious gummy candies come in a variety of fruity and spiced flavours, our particular bag comes with a selection of cherry, orange, lemon, grape and blackcurrant. The texture is harder than expected, giving you a chewy sweet that lasts longer than most gummy candies.

Many of you may remember these sweets as a popular choice of decoration for your annual Christmas gingerbread house. These brightly coloured sweets are sweeped with a granulated sugar coating, making them the perfect decoration for all sorts of baked goodies.

In 2001 the slightly smaller cousins to the American Hard Gums, ‘gumdrops’ were featured in Shrek the movie – where they were shown as a baked goods decoration – a favoured character known only as the Gingerbread Man begged “Not my gumdrop buttons!”. Just one of many pop culture references featuring the American Hard Gum and the Gumdrop, a truly iconic sweet.

A less popular reference but all the same one of my personal favourites is the classic board game, Candy Land, which featured both a Gumdrop Pass and a Gumdrop Mountain.

Did you know? American Hard Gums first appeared in the 19th century United States and were invented by Percy Trusdale in 1801. Interestingly over one hundred years later the NASA Apollo Command modules were nicknamed “Gumdrops” due to their familiar conical shape. 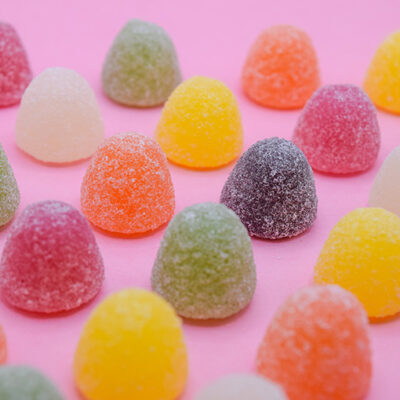