Liquorice Allsorts are an assortment of liquorice confectionery sold as a mix. The sweets are primarily made of liquorice and sugary fondant, which comes in a selection of bright colours and shapes – the sweets also contain coconut, as well as fruit flavouring, making them a deliciously unique sweet! 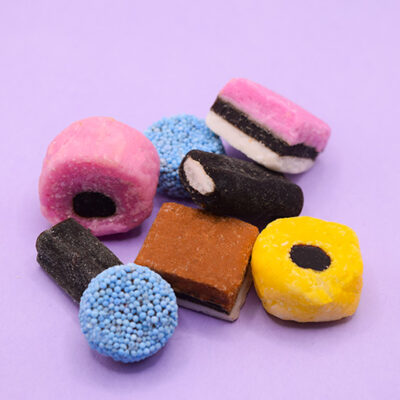 Liquorice Allsorts were first produced in Sheffield and have been around since the early 1900’s and they quickly took Europe by storm spreading across the continent. Along the way they became known simply in many countries as ‘English Liquorice’. In the Netherlands they are called ‘Engelse drop’, in Scandinavia they are called ‘Engelsk konfekt’, and in Finnish they are ‘Englantilainen lakritsi’ all loosely translating to English Liquorice. Definitely a British invention to be proud of!

The Bassett’s company mascot is ‘Bertie Bassett’, a figure made up entirely of Liquorice Allsorts, an iconic figure and recognisable mascot in British pop culture. The character’s origin lies with advertising copywriter Frank Regan who used the actual sweets and a number of pipe-cleaners to construct what was the original version of Bertie before he went on to illustrate said mascot for the Bassett company!

Did you know? In 1899, Charlie Thompson, a Bassett’s sales representative, supposedly tripped over and dropped a tray of samples he was showing a client in Leicester, mixing up the various sweets. After he scrambled to reorder them for the meeting, the client became intrigued by the new creation. This led to the company quickly beginning to mass-produce the sweets which then became such a successful product.

Interestingly their origin story also unveils the history of their name as Liquorice Allsorts were not always known as such. The original items mixed by Thompson were ‘chips, rocks, buttons, nuggets, plugs and twists’. It is not clear which, if any, correspond to which sweet but we can only assume that this list of names used to refer to the content of the ‘allsorts’ before they so aptly renamed the mixture ‘Liquorice Allsorts’.

The big brother to the Dolly Mixture, Liquorice Allsorts are definitely bigger, but are they better? Let us know in the comments!